On May 23rd, I was invited to speak at The Seventh World Day Conference organized by the Swedish newspaper: “ Dagens Nyheter”. The conference was divided into several panels including: Japan after the catastrophes, Obama’s challenges, the flight through Mexico, the African Daybreak and the Arab Spring. All the panels were moderated by Mats J Larsson-from the Dagen Nyheter-and the speakers were mainly the correspondents and photographers of the newspaper working all over the world but the last panel The Arab Spring. 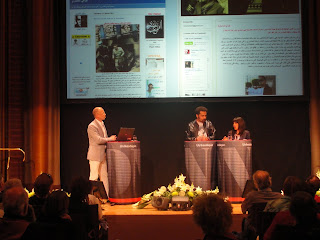 The organizers decided to invite my great friend the Egyptian famous blogger and activist Wael Abbas and I. We both talked about the situation in our respective countries after the ousting of our dictators. 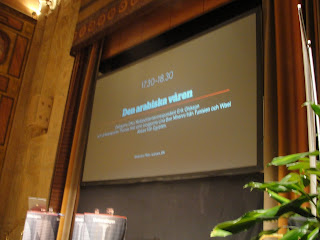 Wael focused on the Military Council and its different infringements. He mentioned violence, the arrest of a blogger and the virginity tests imposed on some Egyptian women. I focused on the police violence and the postponement of the elections and its drawbacks on the fulfillment of a true democracy in my country. After that we had to answer the audience’s questions. This interaction and exchange of ideas were very important and constructive. The audience was very attentive and interested in what we were saying. People wanted mainly to know the most efficient ways to help Egyptians and Tunisians in this critical transitory period. The answer was so easy: Come to our countries and help our tourism. They wanted to know if we were supporting a foreign interference from Western countries and here I had to explain that the majority of European countries supported dictatorships in the Arab world and are continuing to do so and this is why citizens are against any kind of governmental interference in their internal affairs. I also explained that European countries have to stop signing agreements and offering loans to those temporary governments generally rejected by the people. Nevertheless this does not deny that civil society has a big role to play. Indeed through training journalists and activists and teaching them the way to control the elections they can be very helpful. When asked about the situation of journalism and media, Wael and I looked at each other in despair and had the same answer. 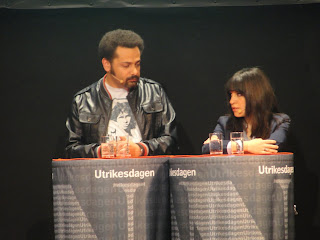 The situation did not improve; the same journalists who used to praise our dictators are now talking about the Great Revolution who freed us from dictatorship and oppression. Media did not succeed their reconciliation with the audience.  Tunisians and Egyptians continue to have recourse to international News channels to know the truth about what is going on in their countries. We can feel some sort of manipulation chaining the journalists and preventing them from working freely. An Egyptian woman from the Swedish parliament asked Wael if he was thinking that the Egyptians were demanding more than the revolution can afford. Wael, so angry, explained that Egyptian people succeeded in getting rid of Mubarak and that they had specific demands, the majority of which were neglected and that they are  determined to continue the  fight and  to make pressure to fulfill all these demands. He announced that May 27th, will be another protest’s day in Egypt. He also talked about the blogging campaign about the Military Council.
After the conference we had an online chat with the newspaper readers. Our hosts invited us to have a good dinner in a good restaurant with a view on Stockholm. 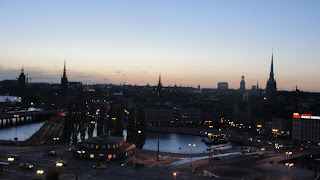 The day after, I was really surprised to receive an e-mail from the Tunisian Embassy in Stockholm; they wanted to meet me.  I declined the invitation…
By lina ben Mhenni à mai 28, 2011