What Does Activism Mean Today ? My Article Published by the Kraut Magazine

Few months ago, I was asked to write a small article for the German Magazine "Kraut"about my own vision and definition of activism  . Today, I decided to publish it here because I am sick of those people who think that cyber-activists and bloggers are those rich people hiding comfortably behind their screens and claiming the fact that they are the heroes of the "revolution".
Activism used to be defined as the use of direct, often confrontational action such as demonstrations or strikes in opposition to or support of a cause. Nowadays with the advancement in new technologies, new forms of activism appeared such as cyber activism which is a new phenomenon growing out of activism, a means by which advanced information and communication technologies and tools such as mobile phones, computers, e-mails, social networks are used by individuals or by groups of individuals to disseminate information among large audiences and to mobilize and galvanize people around a specific issue or cause in a trial to build solidarity towards effective and practical concrete actions. 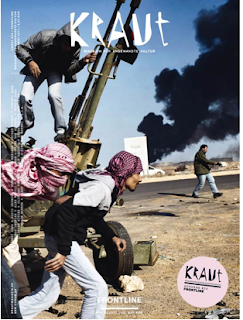 What recently happened in the Arab world is a proof of the importance of cyber-activism and its efficiency. Indeed, when it was almost impossible for journalists to produce and share information due to the media blackout and oppression imposed on them by the dictatorships, cyber activists insured this job. But is a cyber- activist someone who is just active behind his/her screen? 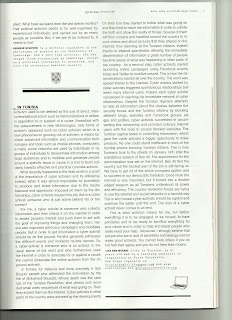 For me, a cyber-activist is someone who collects information then shares it on Internet in order to awake people’s interest and push them to act in the goal of improving things and changing them. He/she also organizes advocacy campaigns and mobilizes people. But in order to get information a cyber-activist should be on the ground. He/she generally witnesses the different events and incidents he/she reports. So a cyber-activist is someone who is an activist, in the usual sense of the word and who furthermore uses Internet in order to advocate for or against a cause. We cannot dissociate the online activism from the on ground activism.
In Tunisia, for instance and more precisely in Sidi Bouzid, people who witnessed the immolation by the fire of Mohamed Bouazizi, whose death was the catalyst of the Tunisian Revolution, shot photos and recorded small video sequences of what was going on. Then they shared them on Internet. Cyber activists in other parts of the country were alarmed by the developments. On their turn they started to follow what was going on and they tried to reach the information in order to unhide the truth and show the reality of things. Several of them left their screens and travelled around the country to record videos and shoot pictures that they shared on Internet. Thus alarming all the Tunisian citizens. Indeed thanks to Internet specificities allowing the immediate dissemination of information a great number of people became aware of what was happening in other parts of the country.  As a second step, cyber-activists started launching online campaigns using Facebook events, blogs and Twitter to mobilize people. This is how the demonstrations started all over the country. The word was spread thanks to Internet. Cyber actions started by Cyber-activists triggered spontaneous relationships between many Internet users. Indeed, Each cyber activist succeeded in reaching his immediate network of cyber relationships. Despite the Tunisian regime’s attempts to hide all information about the clashes between the security forces and the Tunisian citizens by blocking different blogs, websites and Facebook groups, pages and profiles, cyber activists succeeded in circumventing this censorship and provided ordinary internet users with the tools to access blocked websites. The Tunisian regime failed in controlling information, which gave the cyber activists a bigger opportunity to make pressure. No one could stand indifferent in front of the horrible photos showing Tunisian citizens. This is how Tunisians took to the streets on January 14th after the scandalous speech of Ben Ali. The appointment for the demonstration was set on Internet. Ben Ali fled the country but the hardest part of the job is still facing us. We have to get rid of the whole corrupted system and to succeed in our democratic transition. Once more Internet is very important but it turned into a double-edged weapon, as all Tunisians understood its power and efficiency. The counter-revolution forces are trying to use Internet and social networks harmfully. This is why honest cyber-activists should be vigilant and continue the battle till the end. The duty of a cyber-activist never comes to an end.
This what activism means for me but before everything it is to be engaged, to be honest, to have principles and to be ready to sacrifice everything for your cause and in order to help and assist people who really need your help.  Moreover, I strongly believe that people who are in lack of sensitivity and feelings cannot make good activists. You cannot help others if you do not feel their agony and you do not hear their moans.
By lina ben Mhenni à novembre 15, 2011