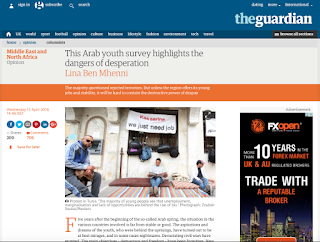 Five years after the beginning of the so-called Arab spring, the situation in the various countries involved is far from stable or good. The aspirations and dreams of the youth, who were behind the uprisings, have turned out to be at best mirages, and in some cases nightmares. Devastating civil wars have erupted. The main objectives – democracy and freedom – have been forgotten. New threats such as the rise of Islamic State (Isis) and terrorism are shaking the region.
Even Tunisia, considered the most successful example, and awarded the 2015 Nobel peace prize for its civil society’s efforts to avoid civil war through implementing dialogue between rival political parties, is challenged by terror and the exapansionism of Isis. It is claimed that the country is the biggest exporter of jihadis to Syria and Iraq. The rapid spread of the terrorist group suggests that the vast majority of young Arabs are poised and ready to join Isis.
To read the article ,  click here.