Yesterday I was in the staffroom writing some texts, when a colleague of mine greeted me in a hurry and informed me that he was in la 'Manuba' University and that he knew that the "Salafis" occupying the university for months now, have just  announced that I  was on their death lists and he asked me to be very careful. I was not surprised at all as many other bloggers , human rights activists, journalists went through the same experience, either for denouncing obscurantism and extremism or for criticizing the new government.  Many of them had been badly beaten and assaulted like was the case three days ago for Professors  Hamadi Redissi and Zied Krichene who were present in Nessma TV trial  and who like hundreds of people attending  just  expressed their refusal to such a breach of one of the basic human rights that is freedom of speech. (see previous post in French).

The same morning, I have shared some Quranic verses and some of the prophets sayings to show those people how hypocrites and how far from Islam they are . I did this in reaction to the threats targeting two of my friend bloggers: Emna Ben Jemaa and Haythem El Mekki. I just wanted to say that our religion is a religion of peace and tolerance. When I got the news of my inclusion in one of the death lists I shared some more of them and guess what : the Salafis did some screen shots and said that I was afraid. This why I shared the following status on my Facebook page Tunisian Girl:

The Salafis/Islamists announced that I am on a death list when I answered them by sharing Quraniq verses and the prophet's sayings to show them how stupid and how far from religion  they are , they said that I did this because I am afraid . No I am not . I was under the live bullets when you did not dare to reveal your ideologies and beliefs and when you did not dare to have your beards and total veils so I won't be afraid of you cowards.

Later, one of la Manuba students confirmed the news and told me that she heard two students  announcing this in a general assembly and that one of the students is studying where I am teaching. As I am now used to all of their tricks and lies to deceive people , I anticipated things  and I announced that I'll never  leave Tunisia because of threats . Indeed, I was sure that they were going to say  that i was lying and i did this to obtain asylum abroad. I was not wrong because they wrote this too.

I am not afraid because I am defending principles I  strongly believe in. No one is paying me to do this. It is my own choice. I am not the victim of a brainwashing as many of them are. I won't stop writing and denouncing their instrumentalization of our religion for political goals. Nevretheless, if anything happens to any Tunisian or to me because of these cowards, the government would be the sole responsible for this. Last year Tunisians had a dream and we are going to fulfill it . No one will steal our hopes and wishes. 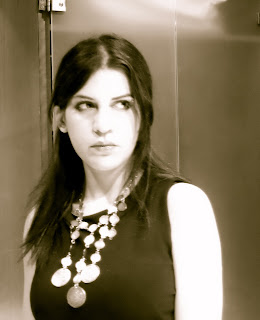 I am the daughter of Dido , Kahina, Aziza Othmana, Saida Manoubia and my mom who gave birth twice and I won't kneel down.