Threatened by a Lawyer

I did not write on my blog for a long period of time because I was really busy promoting my book in Scandinavia . I didn't even find the time to jot down some of my thoughts and my feelings. I was doing interviews and taking part in conferences and TV shows. This is the hardest part about becoming a public figure- this is what many are saying: you are a public figure. I did not chose to be this public figure I prefer to be just me. Today I decided to write again after this long break.I was supposed to talk about the situation right now and about the elections in Tunisian universities. But a video circulating on Facebook pressured me to change my subject. Indeed, a lawyer ' Raja Haj Mansour' recorded a video urging people to mandate her to sue me in justice for spreading rumors that caused the collapse of the economy . According to her I am the sole reason behind the economic difficulties Tunisia is  experiencing right now . She evoked the interview I accorded  to Metro ( You can read the interview  in French and English ) As the following picture shows this lawyer used to be one of the biggest supporters of the dictator we ousted  on January 14th , 2011: 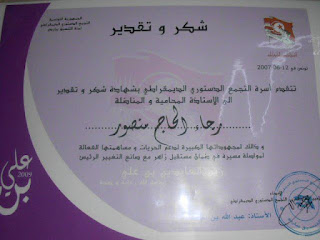 A Certificate showing her loyalty to the ousted dictator
Again I want to say that neither  online threats nor such kind of threats can stop me from telling the truth and reporting the situation in my country. I am used to such kind of practices as I already experienced them  under  the regime of the ousted dictator. Ben Ali muzzled us for more than twenty years. He used to hide the problems of the country and to arrest every single person daring to criticize the situation while pretexting  the preservation of our economy.

Mrs Raja I  will be very proud to be the first opinion prisoner in Tunisia after January 14th. If you win the case  this will be another proof of the biases of the justice. Mrs Raja as a lawyer you are not allowed to give your address in a video . This is called advertisement and it is strictly forbidden  by the Council of the Bar.