On Tuesday 28th, Tunisian lawyers organized a demonstration in support to the inhabitants of Sidi Bouzid. The demonstration took place in front of the First Instance Court of Tunis. As usual, Police officers were present in great numbers . The lawyers sang the national anthem many times. They shouted slogans expressing their support to Sidi Bouzid inhabitants. But they also shouted slogans against the ruling party, the ruling family , and the ministry of interior. 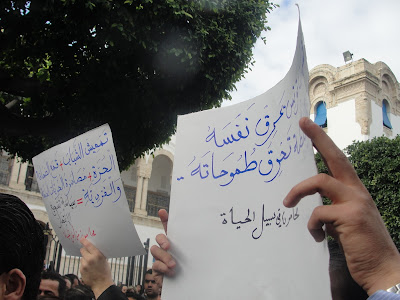 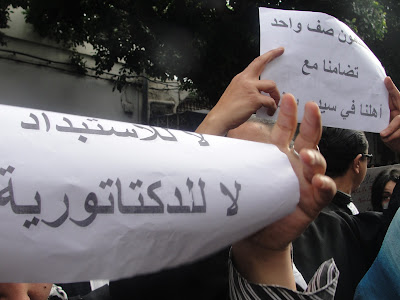 After that, several lawyers gave speeches about the situation in Sidi Bouzid and the general situation in Tunisian. Some people, especially women, who witnessed the demonstration joined it and talked about their own problems spontaneously as was the case for the woman in the following video :


After that , the lawyers went into the first instance court  and shouted the slogans again . They addressed some of them to the judges asking them to be independent .

Later in the afternoon, two lawyers who took part in the demonstration  were arrested they are : Chokri Belaid and Abderrahmen Ayadi.
By lina ben Mhenni à décembre 29, 2010