Recently, the number of cases of immolation by fire has increased in Tunisia. The protagonists of these actions are generally Tunisian citizens who have lost all hope in  a decent life. Unemployment and poverty are au rendezvous and have poisoned their lives. Some of these incidents are largely  covered by the media – by media I mean  citizen media (blogs, Facebook, Twitter) as our official media are limiting their activities  to  the presentation of  the activities of the President, the activities of the party in power, those of the associations related  to the ruling party, international news- , sport etc. Others incidents are not covered at all. I will mention some of these  immolation by fire incidents: the death of Abdesselem Trimech  in Monastir after he set fire in his body  last April, an incident that aroused the interest of civil society and  shook citizens who expressed their anger and outrage at the government’s indifference towards the plights of its citizens in the streets  the day of his funeral, the death of Hani Chamseddine El (unnoticed), the latter originating from  Metlaoui in Gafsa, unemployed burned himself on  November 19, 2010 following the rejection of  his many job applications and the failure of his attempts of illegal immigration. He died the same evening in Metlaoui’s hospital. The most recent self-immolation case the is that of Mohamed Bouazizi, an unemployed from Sidi Bouzid  who  graduated  from Mahdia university .  The matter made all the inhabitants of Sidi Bouzid angry. They went to the streets spontaneously to express their anger and discontent. The government response was predictable: police and paddy wagons everywhere and the worst is feared. 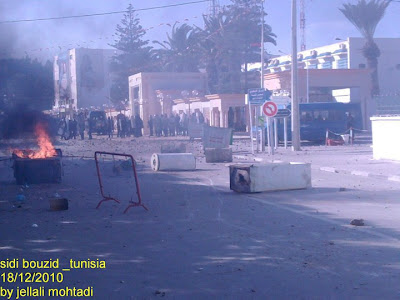 Faced with a government indifferent to the sufferings of the citizens, the various components of the civil society and the country's elites should act. Talking about the matter for a few days is not enough. Our sociologists, psychologists, and our researchers in general should investigate these cases thoroughly. They must try to find solutions and make recommendations.
By lina ben Mhenni à décembre 19, 2010