We'll Fight for our Freedom !

Sometimes we lose our words.  Here and now I am dispossessed of my ideas. My thoughts and feelings are scrambled. Nothing is clear. We talked about a Revolution. We even said that we fulfilled our revolution. The whole world congratulated us and changed their direction to watch another revolution. Journalists who rushed to Tunisia from the four corners of the world, packed up and went less than a week after that the dictator packed up and left carrying away an important share of the country’s wealth.
Two weeks after the fulfillment of the revolution. The situation in Tunisia is more than critical. Serious incidents are happening successively. It all started with the horrible assaults on the peaceful people who were on sit-in in la Kasbah outside the Prime Ministry. The peaceful people who were simply asking for democracy and dignity were beaten, violently chased away from the sit-in area and even arrested. The government denied its responsibility in what happened. But is a government allowed to make such declarations, to advance such arguments? Is a government allowed to be overwhelmed by events? 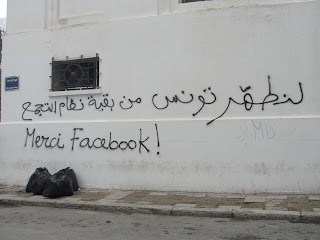 Let's clean Tunisia from  what remained of the RCD regime
Thanks Facebook
Day after day we hear of assaults, kidnappings and violence against innocent Tunisian people. Indeed the dictator left but his regime is still here. State security officers with the help of a villain militia usually awarded by small amounts of money, alcohol, or drugs, are spreading terror in the country. They are assaulting some persons, threatening others. They are also spreading rumors to establish a state of fear and panic among Tunisians.
However these criminals forgot that Tunisians gave a lesson of courage to the entire world. They also forgot that Tunisians broke the fear barriers. Tunisians will never abandon their fight for real freedom and for real democracy! Counter -Revolution forces will not succeed in stealing our achievement . Tunisians let's be patient! Tunisians let's be united.
By lina ben Mhenni à février 02, 2011