Did you say 'An Isolated Case'?

Since the beginning of the events of Sidi Bouzid on December 17th,2010, the Tunisian authorities as well as the official media are insisting on the use of words like:  riots , isolated case, political manipulation etc...
They worked on hiding the truth and accusing opposition and foreign media of  lying and trying to shake Tunisia's stability. They never tried to face the truth and to find efficient solutions. Again,  authorities used violence in different areas of the country causing deaths and serious injuries for demonstrators. 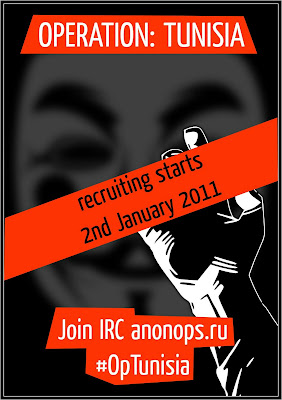 Now, more than 20 days elapsed since the beginning of the events , things did not improve at all. Authorities are using violence as an answer to citizens' demand of their basic rights. They are also working on stifling and shutting  every free voice in a trial to hide and veil truth. They censored many websites and blocked the upload of videos on Facebook . Anonymous a group of hacker-activists offered to help Tunisian protestors and cyber activists and launched  operation Tunisia  , a hacking operation, which started on January 2nd, 2011 and  targeting the Tunisian government websites. The operation is on the one hand an answer to the censorship of Wikileaks and any news source publishing or referencing leaked cables that referenced Tunisia including : Tunileaks and on the other hand a support to Tunisian cyberactivists surrounded by internet police.
The police internet answer has been the hacking of the e-mails accounts , Facebook pages and profiles and blogs of some Tunisian activists     . Tunisian netizens are now talking about a cyber-war.
On the ground, things were not different as some students expressed their anger and joined the protest movement on January 3rd, 2011by organizing demonstrations in different regions of Tunisia. Lawyers protested again outside Tunis courthouse and violent clashes started between security forces in Tala , in the Governorate of Kasserine. Again,police officers used tear gas and live ammunition . They also raided houses and arrested people...
Clashes are continuing in the area
Do you dare talk about an isolated case again?
By lina ben Mhenni à janvier 04, 2011