A Night in la Kasbah

Yesterday , I decided to spend the night in la Kasbah with the different groups of demonstrators who arrived from several regions in Tunisia to express their refusal for the new government including ministers who served under the Ben Ali 's regime. In fact, they were spending their second night outside the Prime Ministry.I had the chance of being hosted by a friend from the Meknassy group and to be accompanied by the ex world champion of Kick boxing Imed Mathlouthi . 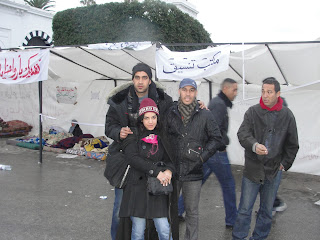 The night had been long with the loud noise of helicopters and shouting groups. I had the opportunity to meet people from : Meknassy, Erregueb, Kasserine , Thala, Kairouan, Sfax, Metlaoui, Menzel Bouzayene , Hamma ,Mezzouna, Sidi Bouzid etc.. We discussed the whole night.
I also visited the tents of the different groups and took photos of the different slogans they wrote on the walls.

The Prime Ministry is now the Citizens Ministry : 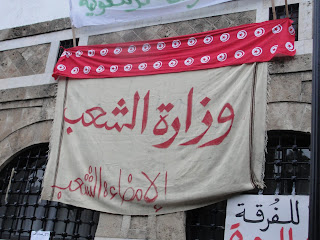 In another version it is now owned by the Jelma, Kasserine and Ben Oun inhabitants. 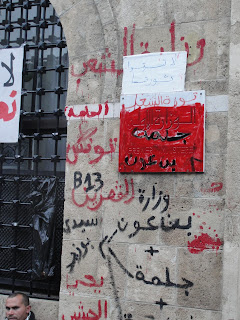 I captured some of the slogans appearing on the walls of the different buildings of the government place.
My favorite one  was: 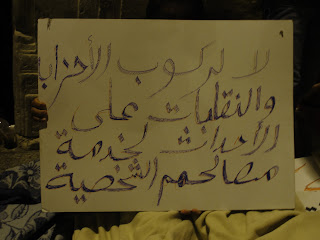 No to the instrumentalization of the revolution by  political parties and  trade unions
I also noticed that some of the groups started hunger strikes. 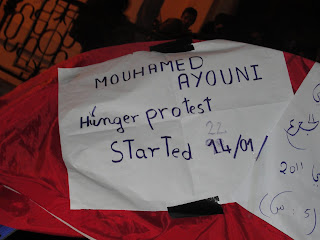 After that I helped some young men in cooking their dinner: 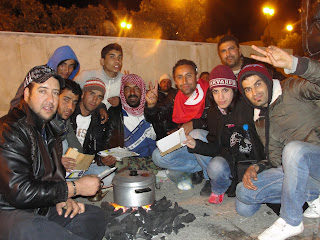 The army was present and watched the area. What catched my attention the most was the solidarity between people. Some persons brought food and water, other brought wool blankets and cushions ... Some people were cleaning the area. In the morning we had to wake up to sing the national hymn and clean the area again. Everything was  well organized and people respected this organization. 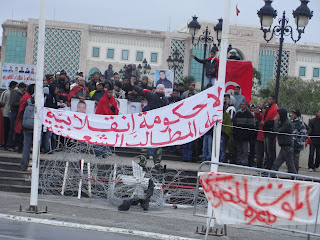