On Thursday January 6th, lawyers organized a strike to denounce  the different assaults they experienced following  the demonstrations they organized to support the popular movements in Sidi Bouzid   few days ago.
In Tunis, the lawyers gathered in Tunis courthouse hall wearing their robes , the red badge , and signs on which we could read : Strike for Lawyers Dignity. 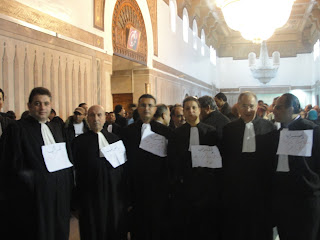 They stand discussing their different problems quietly . After that the President of the Bar gave a speech in which he condemned the assaults on the lawyers. 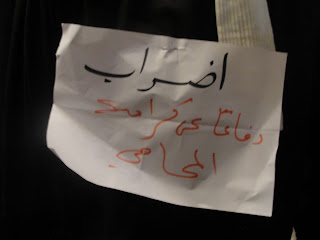 After that the lawyers, sang the national anthem and went outside the courthouse where they formed  the word dignity by standing one next to the other. 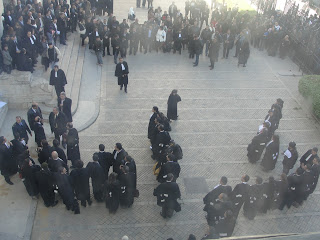 At 1pm the President of the Bar announced the end of the strike and the lawyers sang the national anthem again before leaving the courthouse.

It is worth mentioning that the strike is national and according to some lawyers it has been successful in different regions in Tunisia.
By lina ben Mhenni à janvier 06, 2011