People of color in Tech : Technology and the Tunisian Revolution with Lina Ben Mhenni

I was interviewed by Zara Tewolde-Berhan for People of Color in Tech  and here is the outcome: 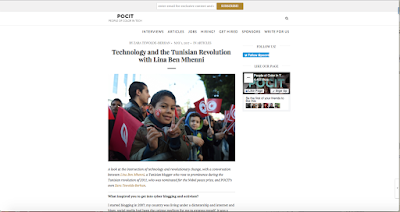 A look at the intersection of technology and revolutionary change, with a conversation between Lina Ben Mhenni, a Tunisian blogger who rose to prominence during the Tunisian revolution of 2011, who was nominated for the Nobel peace prize, and POCIT’s own Zara Tewolde-Berhan.
What inspired you to get into cyber blogging and activism?
I started blogging in 2007; my country was living under a dictatorship and internet and blogs, social media had been the unique medium for me to express myself, it was a space for me to express myself and give a voice to the voiceless people. Since I was a child, I used to write different texts about social and political problems in Tunisia, but I used to keep for myself it was not possible to publish in Tunisia. So the internet was the only medium to do that.