Throughout the last months, I've been receiving messages from people asking me about the reasons of my silence as to the different developments in the country. Sometimes some persons, I've never met in the past stop me in the middle of the street to enquire about the causes of my absence in media. Some people accused me of abandoning the causes I've embraced in the past and others thought that I've betrayed my principles.
Let me say that for more than one year I embraced the cause of the reform of the prison system through the initiative: "Books for Tunisian Prisons".

Starting from February 2016, I've been working on the mediatization of the initiative. I've been also collecting books from donators around the country. I've been making presentations about it  in different schools, universities, etc. But I've also visited several prisons for the distribution of the books we've collected thanks to the generosity of Tunisians and foreigners alike.

In the few coming days, with our partners in the initiative that I have initially started with my father, we will be distributing more books in other prisons.

No, I didn't disappear and I didn't choose silence but I chose to be more effective. I chose concrete actions that would change the life of some people in a sense which would impact the whole society.

Now, I am still working on new projects related to the reform of the prison system in Tunisia. We won't just put books on shelves and pretend that we will make a change. Stay tuned! 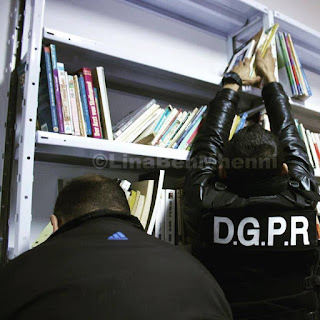 To know more about the initiative, you can visit our official Facebook page here.https://www.facebook.com/livrespourlesprisons/