Samir Feriani has already spent more than one month in detainment. The latter, a high officer working for  the  Ministry of Interior was kidnapped on May 29th, 2011.  It was a Sunday and he was going to buy a gift for his mother on the occasion of the Mothers Day. But he never came back . This happened after he published letters in some newspapers in which he denounced some malfunctioning and failures in the Ministry of Interior. He also evoked and revealed  some dirty operations executed by Ben Ali's Security Services. 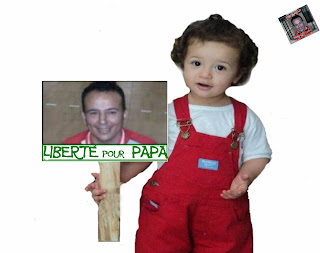 Samir  has been taken into the  military barrack of Laouina , Tunis , where he is still detained . Samir has been detained for criticizing the Ministry of Interior. He has been arrested because he expressed himself.Thisis  why he should be freed as soon as possible. It is a shame to throw a man in jail just because he tried to uncover some hidden truth. Tunisian people won't accept such practices anymore! Free Samir Feriani !!!His wife and children , his mother and his relatives are waiting for him !!!
Free Samir Feriani on Facebook here.
By lina ben Mhenni à juillet 14, 2011