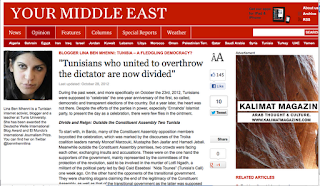 During the past week, and more specifically on October the 23rd, 2012, Tunisians were supposed to “celebrate” the one-year anniversary of the first, so called, democratic and transparent elections of the country. But a year later, the heart was not there. Despite the efforts of the parties in power, especially ‘Ennahda’ Islamist party, to present the day as a celebration, there were few flies in the ointment.