Your Middle East: Graffiti in Tunisia: art or crime? 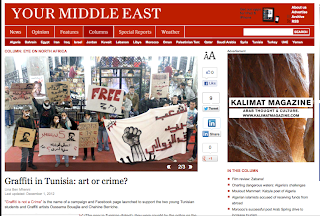 “Graffiti is not a Crime” is the name of a campaign and Facebook page launched to support the two young Tunisian students and Graffiti artists Oussama Bouajila and Chahine Berriche.
Belonging to a graffiti group known as “Zwewla” (The poor in Tunisian dialect), they were caught by the police on the night of November the 3 while they were drawing graffiti and slogans to claim the right of the poor to dignity, on the walls of a university in the city of Gabes in southern Tunisia. The graffiti was an expression of protest and anger against the hijacking of the revolution in Tunisia and to express the anger of the inhabitants of Gabes.