Freedom of Press and Speech in Tunisia : Back to Black !!!

In less than one month, at least three Tunisian journalists decided to risk their lives to denounce attacks on freedom of speech and freedom of press in Tunisia.

Few weeks ago, Nabil Jeridet started a hunger strike to denounce the spread of corruption and favoritism between news papers in the allocation of state advertising, the distribution of advertising-based on political policy and partisan orientation ( read the story here).

On Monday May, 28th both Houssam Hajlaoui and Ramzi Bettaieb working for Nawaat  have started a hunger strike. Indeed Ramzi Bettaieb have been prevented from reporting the trial known as the trial of the wounded and the martyrs of Thala, Kasserine, Tajrouine and Kairouan taking place in the permanent military court in Kef. Moreover Ramzi's two camerashad been seized. He has never succeeded in  getting them back. 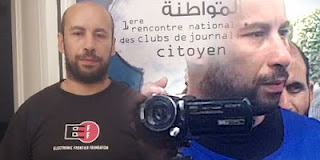 Such attacks on freedom of press are not isolated cases. We have already witnessed several attacks of the kind including for exmaple: the trials targeting Nessma TV and the newspaper 'Attounssia", the conviction of two young men and their condemnation to seven years in jail for blasphemy...( You can read more here)

Tunis…May 30, 2012…
This afternoon, we became aware of a serious incident during our debate last night.
Some 15 minutes after the start of our recording, two plain-clothed policemen, identifying themselves as officers of the local Medina force, entered the vestibule at the Institut de Patrimoine and demanded the names of those who were attending the debate.
A junior Tunisian staff member, was told that it was a matter of “orders from superiors” and the list was taken from her. Another staff member succeeded in tearing off the list of email addresses and telephone numbers as the police left the area.
The New Arab Debates’ team regards this breach of security with the utmost concern and apologizes unreservedly to those who were present at the debate and have loyally supported our events.
We have taken the following action:
We have protested to the Tunisian Interior Ministry and told them that we regard this as an attack on our independence and interference in our right to pursue a free speech project in a newly democratic country.
We are suspending all our operations in Tunisia, pending an internal investigation and until such time as we can guarantee the security of our data.
We will be holding a press conference at 10am on the morning of May 31 at the Novotel, Avenue, Mohamed V.
Tim Sebastian, Chairman, New Arab Debates.

The situation of freedom of press and freedom of speech in Tunisia is really alarming. We should keep on fighting to really preserve these fundamental rights.
By lina ben Mhenni à juin 01, 2012