My participation in the Oslo Freedom Forum

First of all I want to thank the organizers for giving me the opportunity to talk during  in front of this great audience consisting both of people present here and people who are following the Oslo Freedom Forum thanks to social media and new technological advances, for they are dedicated to freedom and human rights issues.  I dedicate my participation in teh Oslo Freedom Forum to Tunisian martyrs and people because if it wasn’t for their sacrifice I wouldn't  have been able to leave Tunisia because the last time I tried to do this  before January 14th, the frontiers police prevented me from leaving the country.  I also dedicate this to all the Arab people fighting for freedom and paying a high price for it. I dedicate it to all the people who believe in freedom around the globe.I am very proud to belong to the country that started this dawn of a New Arab World 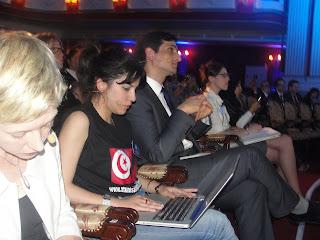 When I received the invitation to take part in this event after the ousting of Ben Ali from Tunisia on January the 14th, I planned to talk about the role played by social media during the Sidi Bouzid events in Tunisia, and in other parts of the Arab world, a role that I personally think was exaggerated. I guess that you all know that social media played an important role in overthrowing a 23 years old dictatorship in my country and another authoritarian rule in Egypt. "The world was and is following Arab citizens gathering to protest against the authoritarian regimes that restricted and limited their freedom and offered them poor economic opportunities or none at all, thanks to Twitter feeds, blogs, Facebook videos and photos that disseminated across the web instantly despite limited internet access in many of those Arab countries. But social media alone wouldn’t has facilitated the Arab revolution. It was combined to a myriad of other factors as well as different methods of digital and traditional media: technological advances such as cell phones, cameras, Facebook in conjunction with more traditional media outlets like TV channels Al Jazeera and France24 created he circumstances for such effective information dissemination". In both Tunisia and Egypt, people succeeded in dethroning the dictators. Citizens in Libya, Bahrain, Syria and Yemen are still fighting for dignity and freedom. The world is already talking about the spring of the Arab world.
Now I have the opportunity to frequently travel around the world and this allows me to discuss with people and to understand that the majority has a mistaken idea about what is going on in countries like Tunisia and Egypt. The majority thinks that we have succeeded our revolution and that everything is fine over there. This is not true and I’ll talk about the recent developments in my country. Indeed, on May 4th a video showing the previous minister of Interior acirculated  on Facebook. He was talking about the misdeeds of the transitional government, about his dismissal and about conspiracy. Whether what he was saying was true or not, any Tunisians decided to take to the streets to denounce the behavior of the present leaders of the country and guess what? The government used the same old methods of the previous regime to repress the peaceful demonstrators: tear gas and live ammunition were in the rendezvous. The police was beating people. Rare were the people who escaped this crazy violence. What is dangerous also is that several journalists and bloggers were kidnapped, beaten and tortured, to be later on  released in an awful state . Videos of this horrible violence circulated on Facebook, and "Al Jazeera" broadcasted some of them. One of the most horrible videos was showing three policemen badly hitting a woman lying on the ground. I know that some people were killed on May 5th , 6th , and 7th . They were shot by the police bullets. Normally the police officers’ duty is to protect citizens and not to kill them. This is not the case in my country.
I have the impression that the world does not care about what is going on in Tunisia anymore, many events are happening  simultaneously around the globe. This is why I am seizing this opportunity to say that there are no concrete changes in Tunisia. The people are still suffering; they are the victims of the  counter-revolution forces. Freedom and freedom of speech are just myths for us.  We are not enjoying freedom of speech as the people outside Tunisia think. The battle is continuing and despite the dark side of things, I am hopeful and faithful in the Tunisian people especially the young ones who showed and are showing a big resistance. Their dedication to freedom and democracy is great. Our slogan is:
ان عدتم عدنا
Hopefully , we will talk about a real Arab spring pretty soon .