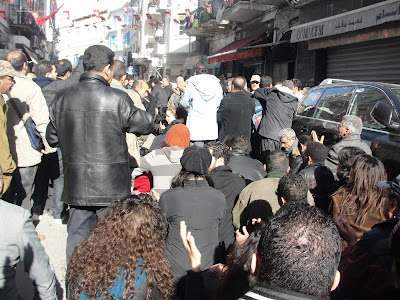 After what happened in Sidi Bouzid, calls were launched to organize demonstrations and protests in different regions in Tunisia. In Tunis people were called to gather in Mohamed Ali’s Place in front of the Tunisian General Work Union to express their support to Sidi Bouzid inhabitants. I decided to share the grief of the inhabitants of Sidi Bouzid. Arrived at the place specified for the event, I was not surprised to see that police officers outnumber demonstrators. At 11 am the protesters raised slogans denouncing what is happening in Sidi Bouzid, and some trade unionists including one from Sidi Bouzid gave speeches on the situation in the region. After that, the protesters wanted to walk in Tunis streets. The police blocked their path and this is led to violent confrontations and scuffles. Nevertheless protesters managed to get to Mongi Slim Street while continuing to shout slogans and sing the national anthem. The police continued to push everyone and to insult people vulgarly and they even beat some people. From the street Mongi Slim, protesters managed to move to the street parallel to that of Mohamed Ali. There, violent clashes began. People were crushed and a young man was brutally beaten by the police. The police forced the demonstrators to turn back. Once in Mongi Slim again, protesters raised slogans for freedom of expression, freedom to manifest, as well as  for the right to work and for young people killed during the events of Sidi Bouzid which are continuing and spreading  to other regions . Then demonstrators returned to Mohamed Ali’s Place and a group a students sang the UGET anthem as well as some of the songs of Marcel Khalifa.
By lina ben Mhenni à décembre 25, 2010