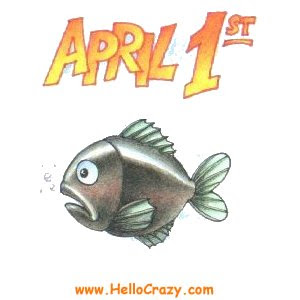 It is April ,1st, starting from last night I have been wondering what pranks my mom had planned for this year Fools' Day as she is the only one who succeeds in trapping me as I believe whatever story she says : my dog who gave birth to 3 puppies , the carpets that my mom washed and some thieves had stolen , and the list is too long .

Until this hour , my mom did not tell me any story ... but the day is still too long !!

But let's look at the history of April Fish :

The Fools' day is celebrated all over the world , both adults and children enjoy playing pranks . However it is believed that this habit started in France and even if some say it started with Pope Gregory XIII in 1582, most likely, the stage was set when King Charles IX of France in 1564 ordered a new calendar to replace the old Julian calendar. The new calendar was then named the Gregorian calendar, and changed the order of the months and moved New Year's Day to January 1. Before the change, the New Year was celebrated on March 25, and ended on April
Why a fish ? The name “April Fish” applied to the victim of the joke. The idea is that an April fish is a very young fish, and thus easily “caught”. It is thought that some French resisted the change and continued to celebrate the New Year on April 1st .Those who had already made the change ridiculed them, and sent them fake gifts or invitations to nonexistent parties. The butt of jokes around this time of year, they were called ''fools'' for celebrating New Year's on April 1 instead of January 1. Come to think of it, the entire situation seems very French indeed!

The French eventually adopted April 1 as a new celebration of these very events, and called it Poisson d'Avril meaning ''April Fish'', a term that is used to this day. So why the term ''April Fish''? Because the New Year once coincided with the sun leaving the zodiacal sign of Pisces, the time of year was significant to the New Year's celebration on the old Julian calendar.

In modern day France, Poisson d' Avril is celebrated by children, who often make paper fish and run around taping the fish to their friends' backs, making them a "fool". Once the ''victim'' realizes that he or she has been fooled, the prankster cries out ''Poisson d' Avril!''