Par lina ben Mhenni février 21, 2011
Well I really don't know how to talk about what is going on in Libya. Well it is a genocide, a slaughter, a mass execution , massacre...
What Ghaddafi is doing in Libya was expected from a  dictator in power for more than forty years. The man proved to be crazy years ago. What is revolting however is the world silence . Everyday, hundreds are killed  in different areas of Libya.  Authorities, who didn't get the lesson from their neighbors,   opted  media blackout. 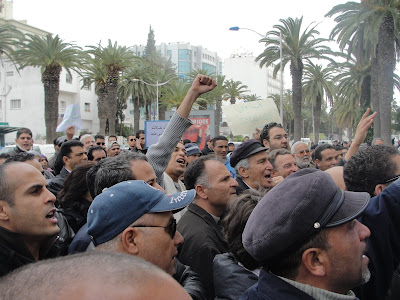 Tunisians who exported revolution to the different countries  the region are following the Libyan revolution developments attentively. They are greatly encouraging their brothers in Libya. Despite the critical situation we are witnessing  right now we are ready to support Libyans. Today, several demonstartions were organized outside the Libyan Embassy in Tunis and some of them offered to host Libyans who could not go back to their country because of the  chaotic situation Libya is experiencing.
Hopefully Kaddefi will leave and libyans will be free as soon as possible.